Part of the lions, Gado is boastful, loud and brave!
So brave, he frequently charges head first, recklessly, especially if a member of the pride is in danger...
‍
Family is always the first thing in his mind!

Gado wears a leather jacket with a big fur collar that mimics his mane when untransformed. And guess what?

He wears no armor, and hides no weapon! The only thing he sports in his outfit are his numerous scars, mementos from his battles. 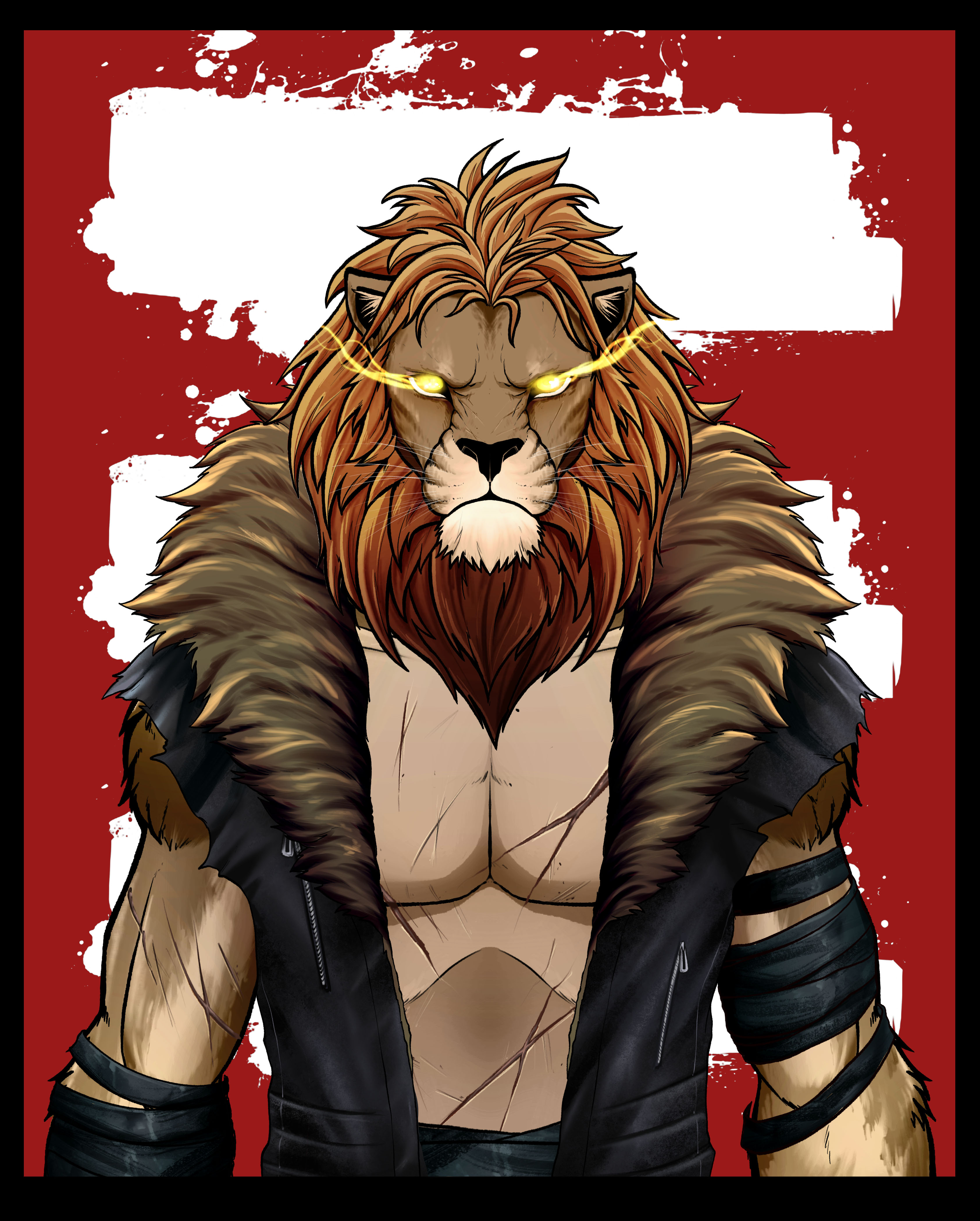 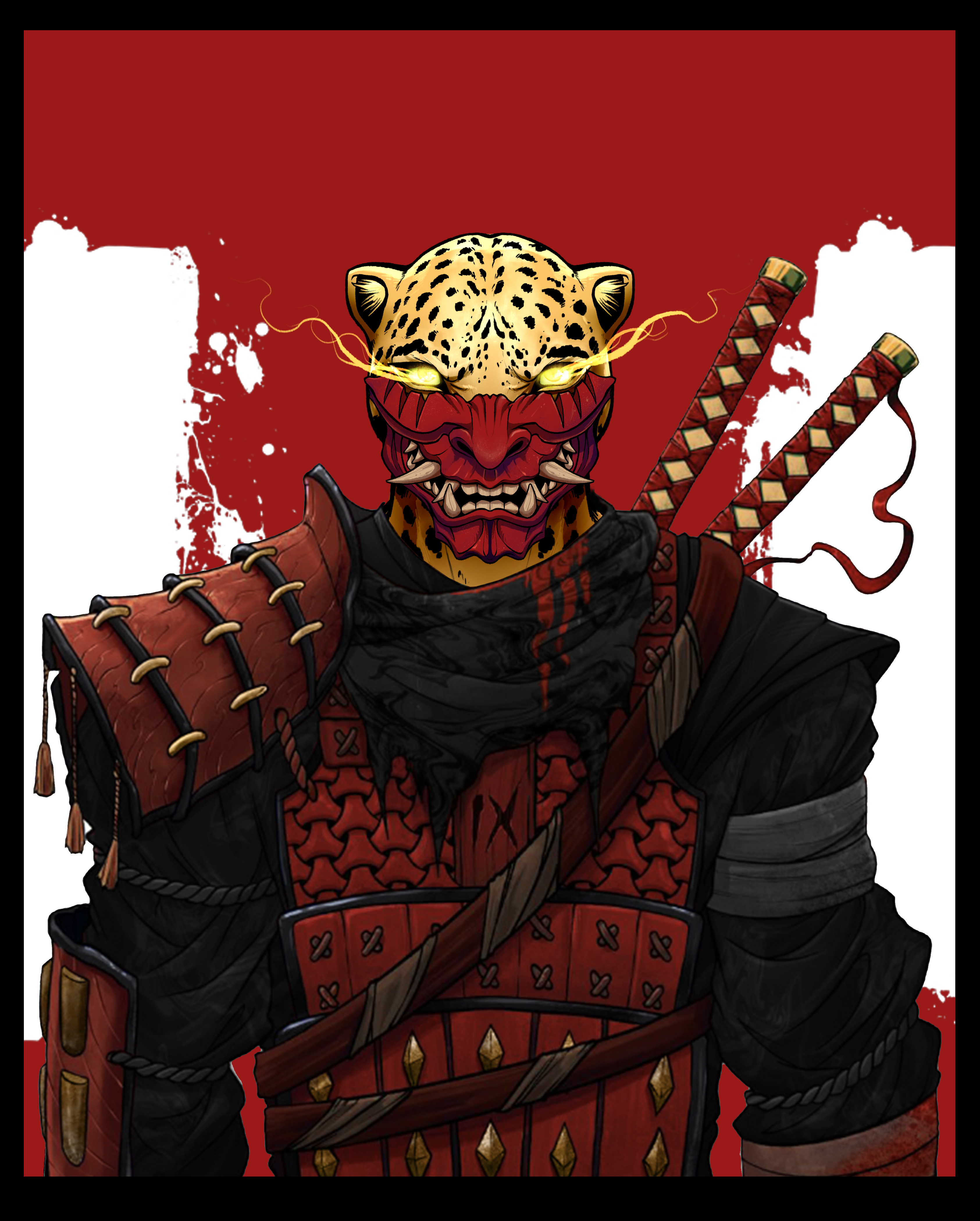 Tlaloc, a proud and honorable warrior hailing from the lands across the sea, was educated and raised under the 8 values of Bushidō.
‍
He is, effectively, Samurai

Tlaloc is powerful and boastful and frequently wears rich and colourful clothing to reflect his status.

He has a little qualm with another of the Onii as they frequently get confused with each other...
Of the two, Tlaloc seems to be the most offended by this comparison as he believes himself above all others, and cannot understand how he might be confused with someone half his size.

As all leopardS, he is mysterious, silent.....and deadly!

Raised in the misty regions, Shin descends from a long lineage of shadow warriors.
Akin to the Spartan agoge, at age 7 the children are taken from their mothers and thrown in the darkest of pits to fight for their survival.
Taught to fight, steal.....even kill.

Shin wears his tribe's traditional dark robes, he rarely speaks and is frequently mistaken with Tlaloc due to their similar manes. He doesn't seem to care too much......while the jaguar... well let's just say he doesn't appreciate the comparison. 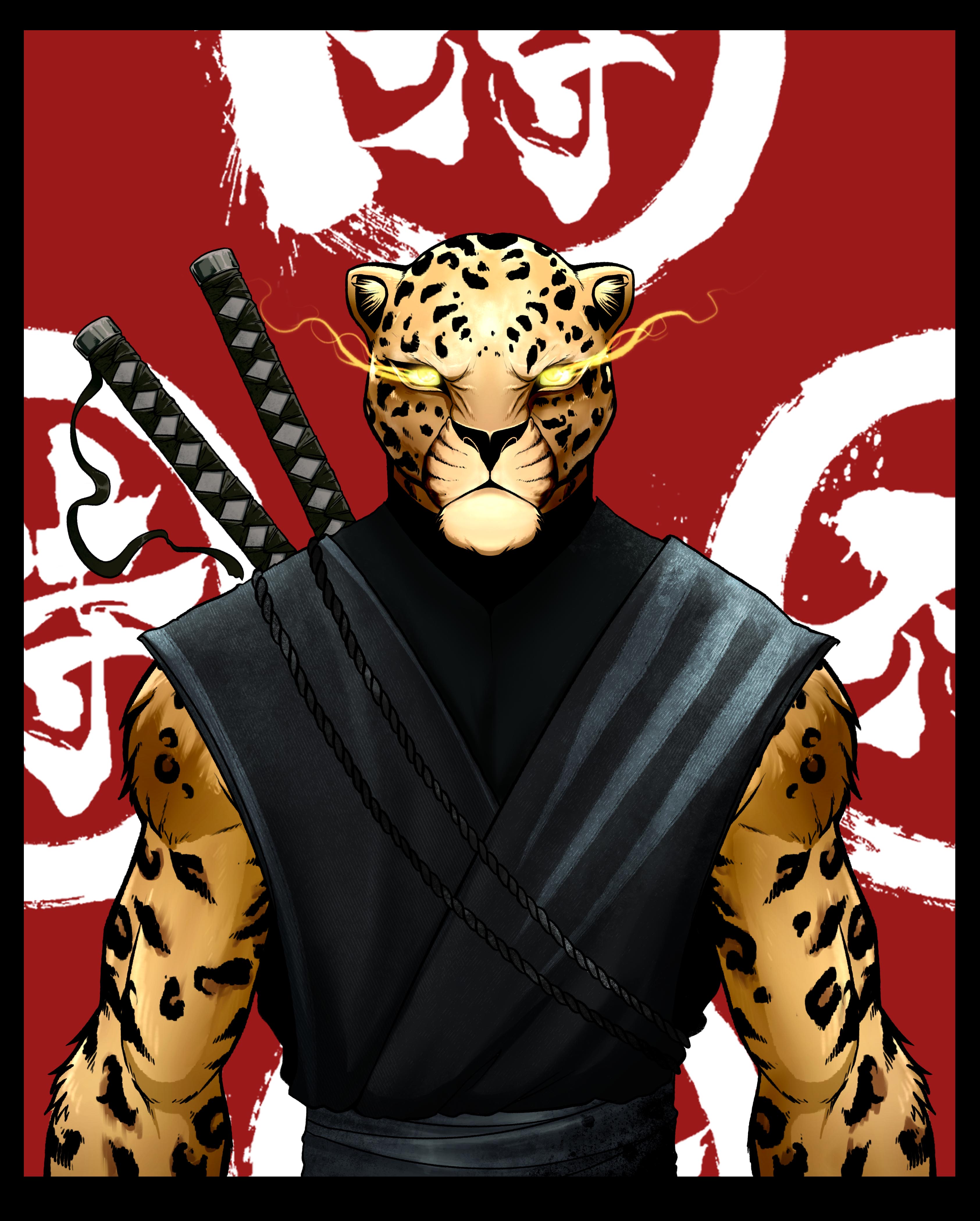 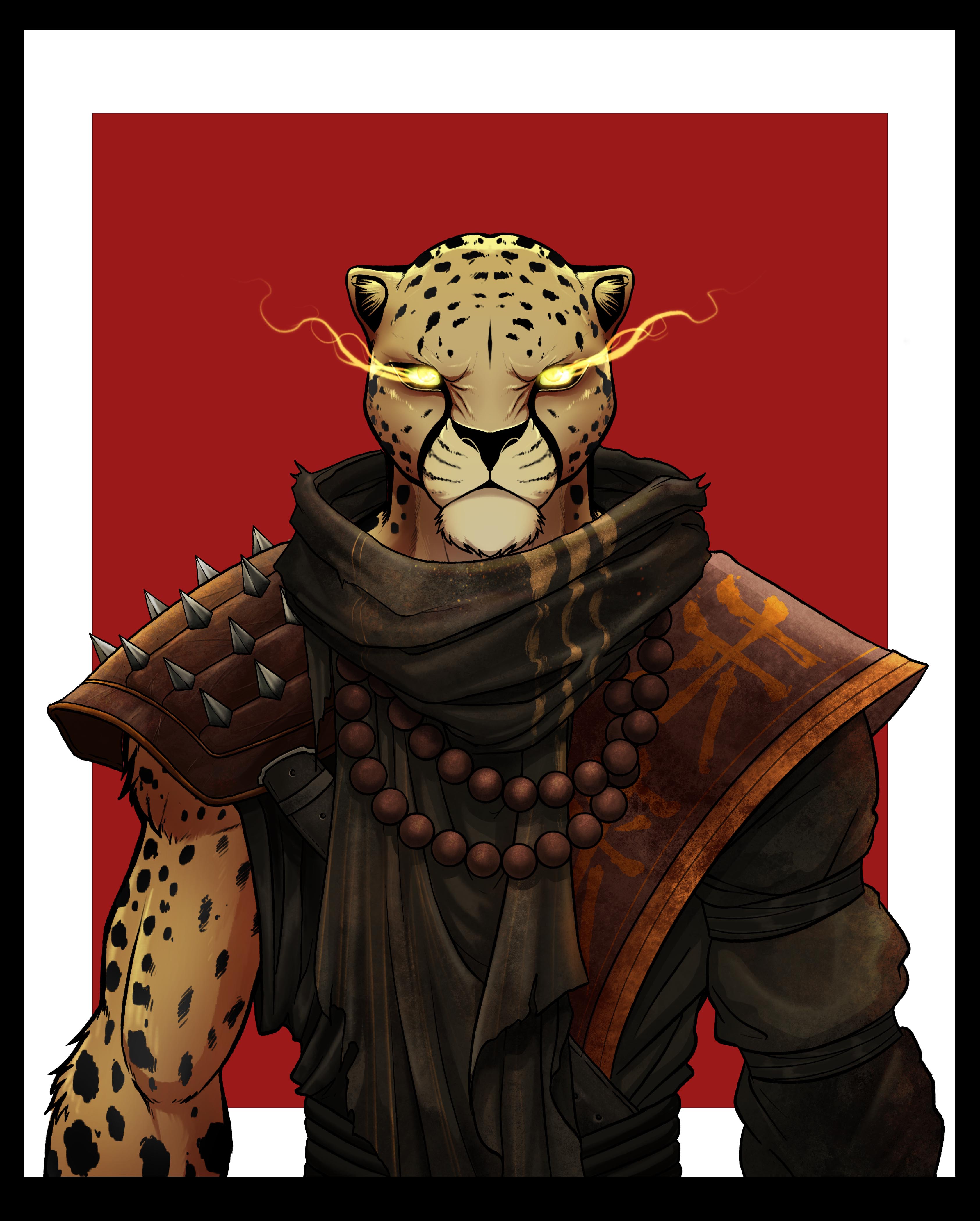 The Spiritual one of the lot.

In deep sync with both the spiritual world the one of the living, the Cheetah is said to always be floating between the two planes of reality.

Some say he is one of the guardians of the underworld, a shinigami

The tears in his mane are a reminder of the pain he comes in contact with when drifting to the death plane.
He seems to be unphased by death and physical pain, probably due to knowing what’s on the other side.

He always wears drapy and simple dark outfit reminding a grim reapers and his tears are translated in his human form in the form of war paint.

Aggressive, cunning and ruthless, the Tiger is feared in every corner of the known universe.

Silver tongued, he is a natural born strategist and does not hesitate at using his charms to gain an edge.It is no mystery that he is considered the most dangerous of the lot.

A king of the underworld, he wears an elegant and opulent outfit. He is always the best dressed of the lot.
Although charming, he always emits an odd sense of danger...

‍Don't get between the tiger and his prey 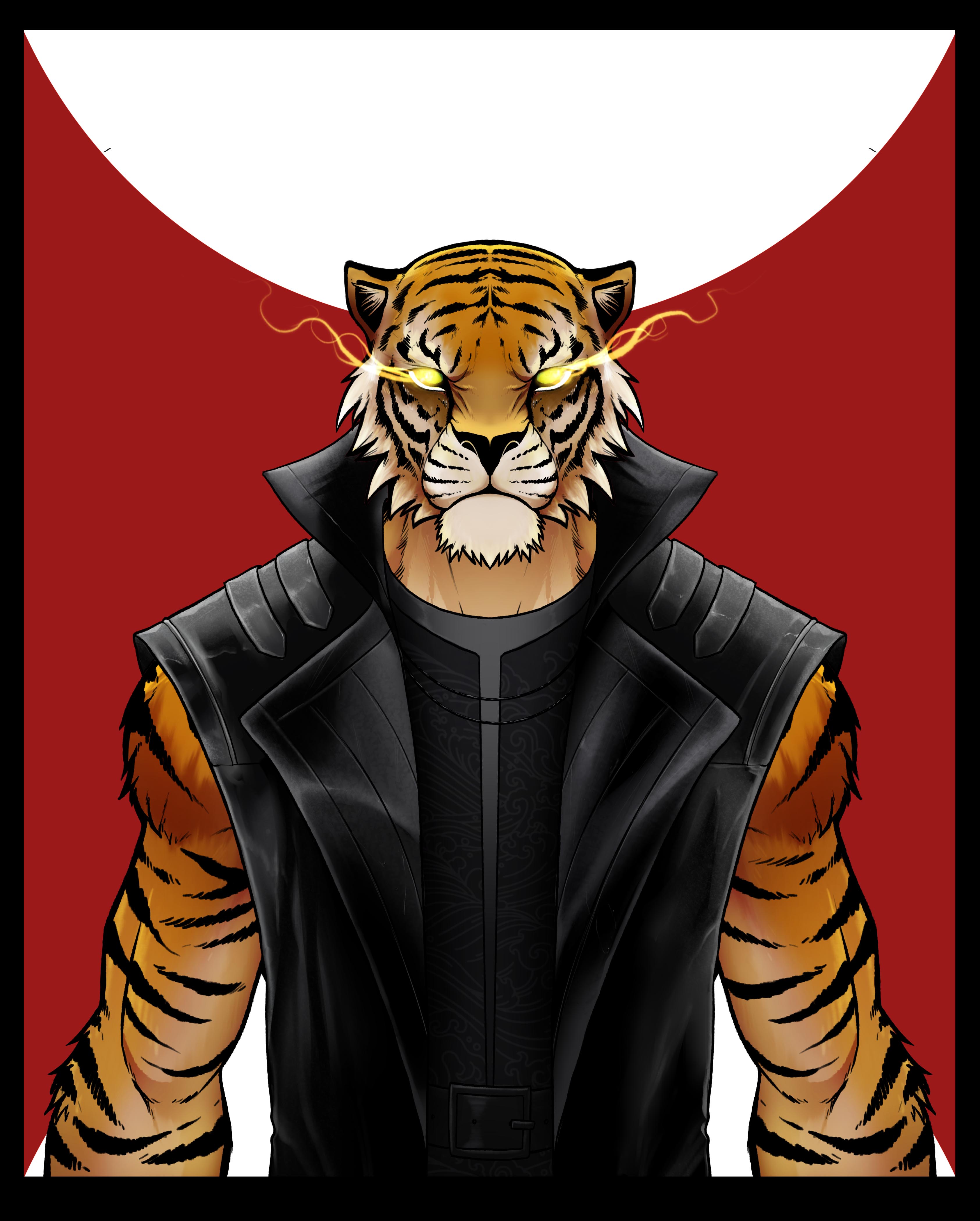 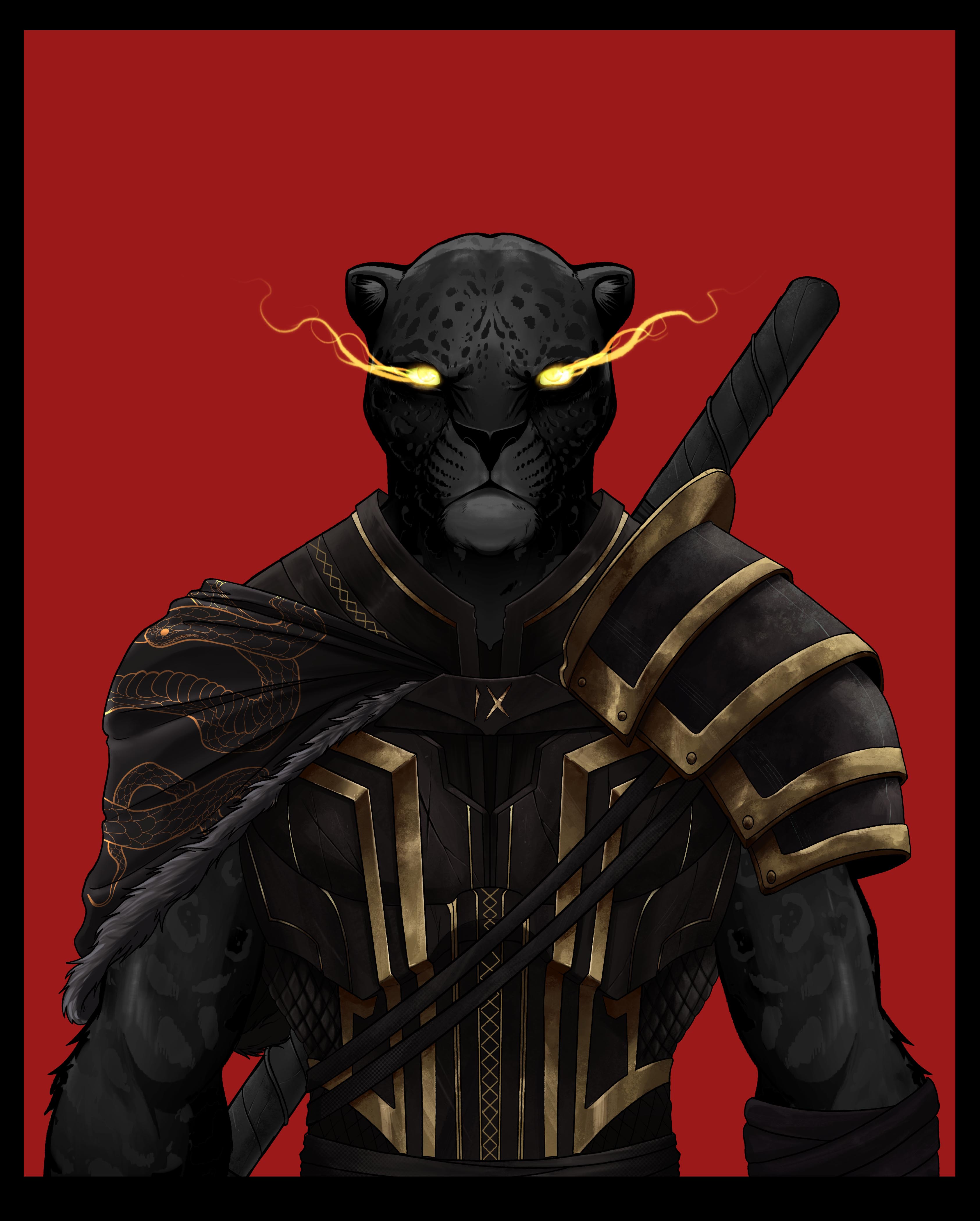 Hailing from a far land, the panther is the "stranger" of the Onii.
Apparently he comes from a land where people are still in awe of zoomorphs and honour them.

The equilibrium in his homeland is reflected in Mido's character. Always in balance, he is the only Onii that can control his transformation without the need of a morphing stone.

Venerated by his peers, Mido wears luxurious clothes with rich detailing in precious metals; worthy of a divinity.

A loner warrior-monk, Yenba is indigenous of the ice mountains of the North.

Not particularly keen on battling, he prefers dedicating himself to the medical arts. Of the 9, he’s definitely the most approachable of all.

A savant of sorts, he loves knowledge and never leaves his scrolls behind.

Forever cordial no matter how rude one is to him, Yenba frequently is mistaken as not dangerous by his peers.
Little they know.......his fury is unstoppable and his temper considerably shorter if he has just one glass too many. 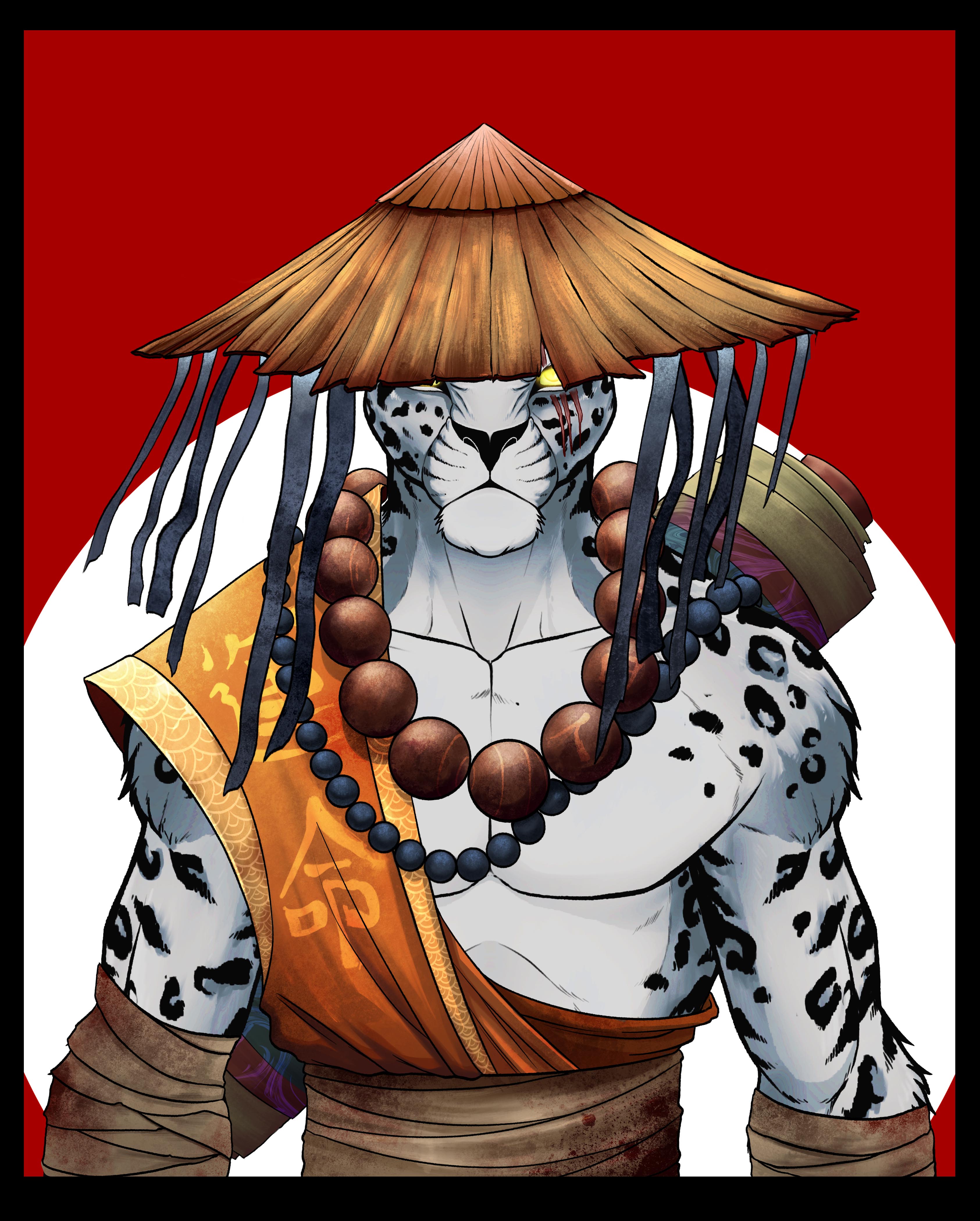 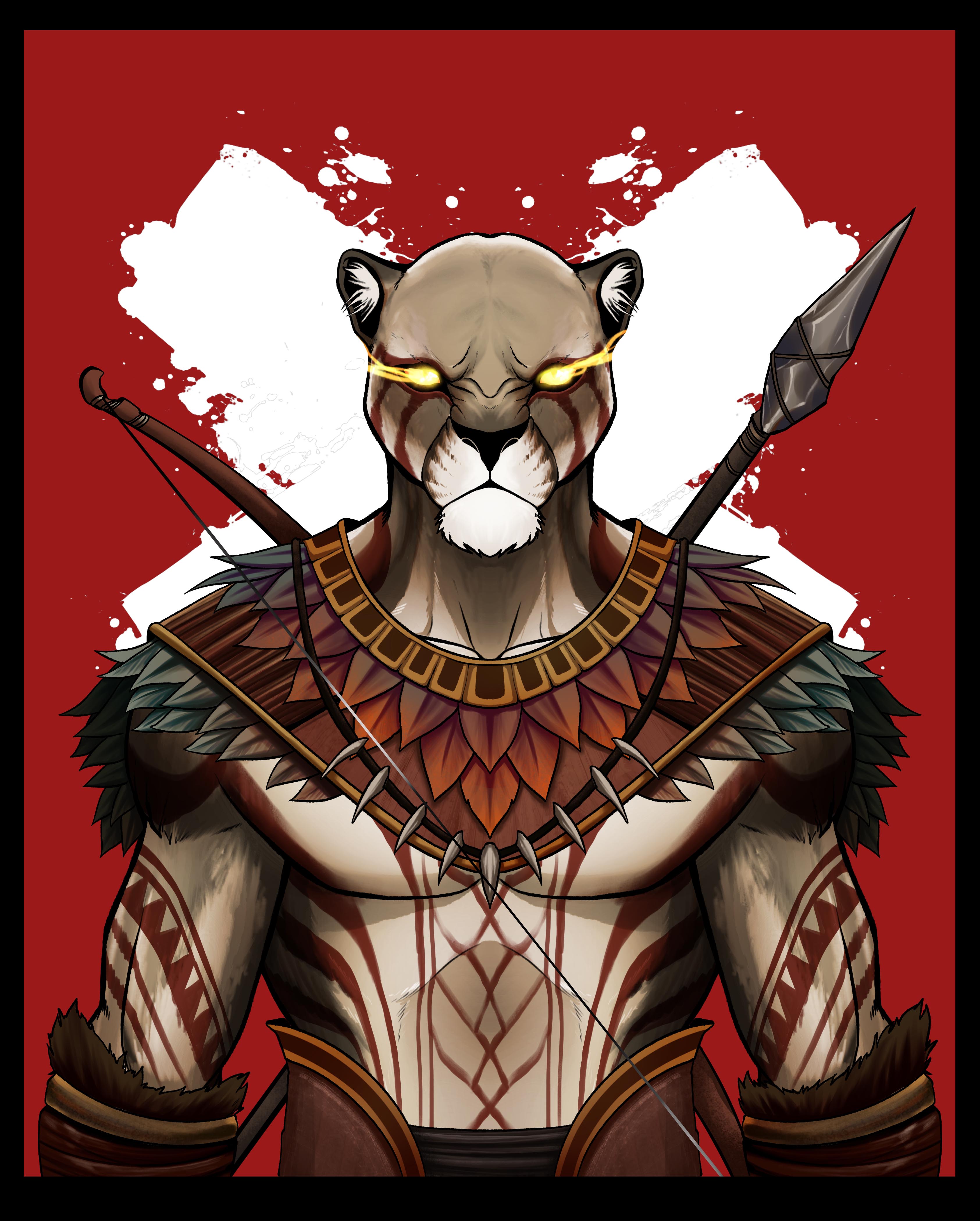 Also known as the ghost, Wakan is a descendant of the hunter tribes across the seas.

Once a florid community of men and Onii in great communion with their lands, Wakan's bloodline was almost extinguished during the great wars while he was just a child.

Deeply marked by the genocide of his people, today he travels alone and hunts down the perpetrators of the brutality.

His nickname comes from his ability of moving unseen before striking......the few that survive an encounter tell stories of a shadow with eyes as burning as flame and fangs as sharp as knives.

He wears his victim's blood as war paint, a warning to those that encounter him.